ATV vs Snowmobile For Ice Fishing | Where To Put Your Money? 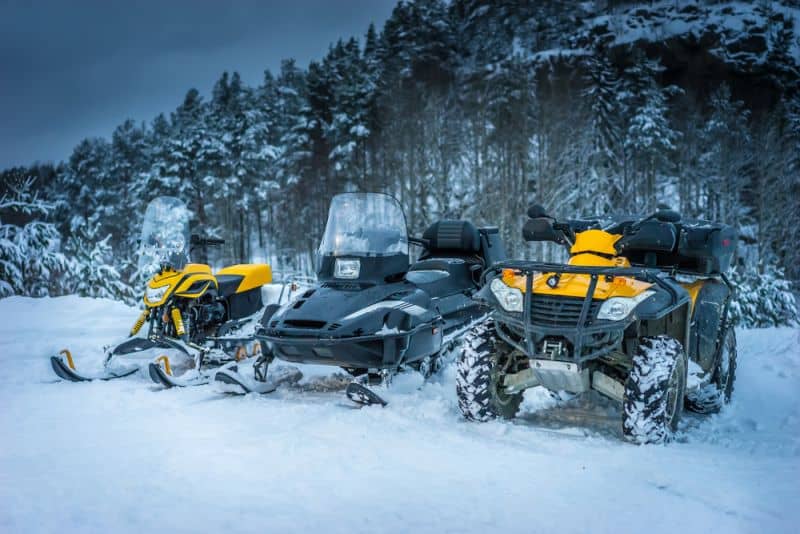 Ice fishing anglers are often perplexed by the age-old dilemma between getting an ATV or a snowmobile before they head out to fish on the ice. And we wanted to end this debate once and for all because there is a lot of misinformation floating around.

With a large budget, get an ATV and install tracks on them. It will be your year-round all-purpose machine. For a medium budget, buy a new ATV and a second-hand fan-cooled snowmobile. On low budget for low snow regions, an ATV is an apt choice. If it snows heavily, you cannot do without a snowmobile.

We will look at various features of both snowmobiles and ATVs and compare them. You can even buy both if the budget is not a problem. And if your budget forces you to choose one, see how heavily it snows in the area you live in. We will strictly stick to the benefits both provide when fishing on ice and see which would be the optimal choice.

Outside the intended use of ice fishing, what we declare as the winner for a particular feature might or might not be a good choice. But for ice fishing, we will provide sufficient arguments supporting our selection. We will keep scores, and by the end of the article, the one with the most points wins! Fair enough?

Use On Ice & In Other Conditions

ATVs or All-Terrain Vehicles are designed for various terrains. Whether it is dry land, wetland, main roads, off-roads, hills, valleys, or trails, an ATV can take you anywhere except areas with deep snow in winters. An ATV can also work well on frozen lakes and rivers with no or bare minimum snow.

On the other hand, a snowmobile is explicitly built for making its way through deep snow like a boat in water or areas where there is at least some snow cover. It is not advisable to use it on dry land and other conditions. Even bare frozen lakes and rivers without snow are not the ideal conditions for a snowmobile.

Thin ice is a problem for both the snowmobile and the ATV and is extremely dangerous. Make sure you exercise caution while deciding to cross a frozen river or lake. Never trust it completely. 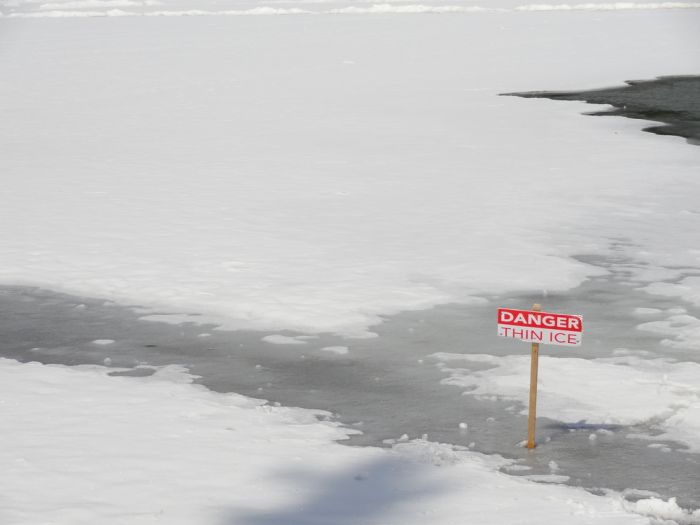 Using A Snowmobile On Thin Ice

Through a technique called snowmobile skipping, you can glide your snowmobile over ice cracks with water by pinning your throttle. But not everybody can do it as it takes a great degree of learning, accuracy, precision, knowledge, technique, and control over your vehicle.

You need to go at a certain acceptable speed with the throttle open. Still, it can be a great lifesaver if the ice underneath begins to crack. Whether it has snowed recently or there is deep slush, a snowmobile will carry you across. An ATV, on the other hand, would sink right in. There is no way out.

For ice fishing, it is much more feasible to have an ATV when there is bare minimum snow and a snowmobile for both low snow and deep snow conditions. The ATV's versatility seems like an attractive feature but provides no value when you realize that you cannot go ice fishing on it due to the thick snow cover.

Thus, both get a point each as both are limited by certain terrain conditions in winters.

If you plan on going ice fishing on an ATV, you'd be in for a nightmare if there is a lot of snow. The ATV isn't designed to traverse through it as there are many gaps, holes, and openings. They tend to get packed with snow.

The only way around this is to get your ATV modified by the installation of tracks, but that significantly increases the cost of the whole setup. With tracks, your ATV would work seamlessly in deep snow, but the fuel consumption increases.

An ATV with tracks installed is your ultimate all-purpose machine, but not every angler can afford such an arrangement. A snowmobile, on the other hand, glides through the snow smoothly because of its build. The snow in a liquid-cooled system is continuously thrown on to the rear suspension to prevent engine overheating.

This snow then melts into a liquid due to heat but brings down the engine temperature through heat dissipation. However, in areas of no snow, engine overheating can be a big issue with the risk of melting parts and explosions. People often deploy ice scratchers for such conditions.

An ice scratcher literally scratches ice and throws it on the heat exchanger when you move. It is a workaround but not as efficient because shards of ice are thrown instead of the snow. Moreover, it scratches the surface to convert the ice into snow like powder for efficient movement. It thins the ice thickness in the process. 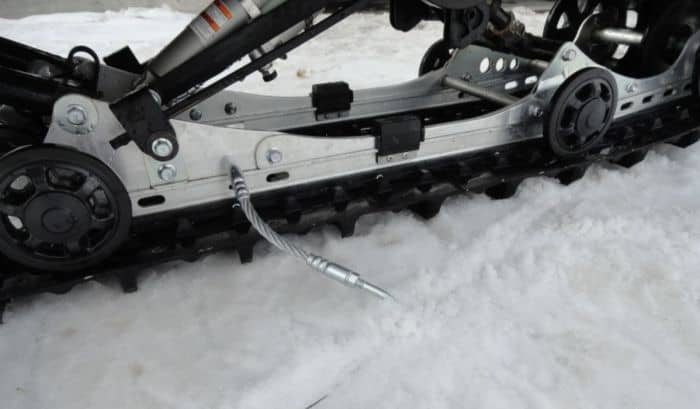 What Snowmobile Setup To Choose?

A fan-cooled snowmobile with electric start and reverse feature is the best choice. Ice fishing can now be done in both heavy snow and low snow conditions without the risk of engine overheating. But avoid slush as it is dangerous when you are on ice. Remember when we say no snow, we still mean driving the snowmobile on ice.

Do not take it out on asphalt roads like the ATV. That would be suicidal for your snowmobile. Also, the performance on ice without any snow won't be as great as when on lots of snow due to lubrication problems and slide issues. It would add to the early wear and tear of the snowmobile tracks and skis.

Here, the snowmobile gets the point because it can be used in deep snow and bare ice without snow (even if the performance isn't ideal and not recommended). On the other hand, the ATV design renders it capable of using only on hard frozen ice sheets with no snow or bare minimum deposits.

Due to its ability to perform on multiple terrains, you can use an ATV all year long, but a snowmobile can only be used in the winter months. Also, unlike the ATV, rigging a snowmobile is really challenging if you are considering dual usage. So, which is better for ice fishing?

Many ice anglers feel that when there isn't enough snow, you can always walk to the desired fishing spot, and thus the need for an ATV is eliminated. However, from a completely objective perspective of the length of usage, an ATV seems to be a better investment.

In short, you can use an ATV all year round in multiple conditions, whereas a snowmobile is only suitable for the winter months and that too if there is sufficient snow. But if we were to look only at our use for ice fishing, we cannot concern ourselves with year-round usage.

As deduced from the points above, a fan-cooled snowmobile till now is clearly a better choice over the ATV.

When using a snowmobile, all your ice fishing equipment like rods, reels, augers, rod holders, electronics, etc. need a separate trolley. You need to put all your stuff in the trolley, attach it behind the snowmobile, and then only you can think about moving to your desired ice fishing spot.

On the other hand, owning an ATV eliminates the need for a separate trolley and all the hassles that come along with it. Put all your equipment in the rear of your ATV, and that's it! A hub or small flip over on the back rack is all you need as a separate trolley or trailer is no longer necessary.

And when it comes to passenger capacity, here too, the ATVs win as most of them are designed to carry one or two people along with the driver. Most snowmobiles are designed for just one person, and to carry someone along, you'd need to attach an extra trolley or a sled behind.

In this case, the ATV is a clear winner since you do not need to attach anything extra while going out most of the time unless absolutely required, and this saves you money on the extra attachments.

The ATVs pack in immense power due to their large engine size. Ice anglers even use ATVs to pull large ice houses. Whether it is towing trolleys with a lot of people and gear in them or large trailers, ice shanties, etc., a common ATV with the right tires is suitable to do the job.

Anything of this sort is beyond the imagined capabilities of a snowmobile. Thus, for ice fishing, we want something that can pull in large attachments containing all our gear and many friends and family members. Thus, ATV is a clear winner and gets the point.

ATVs are big and chunky and require a lot of space. Your standard trailer can only hold a couple of ATVs, and it is a pain carrying them around. Even while parked inside your garage, they will take up a lot of space, and more often than not, it causes anglers an immense amount of frustration.

Ultimately you'd either have to expand the parking space or be forced to choose between your favorite car and the ATV for the coveted parking space. Snowmobiles are extremely compact and thus require a lot less space. They do not pose any problems when you have to carry them from one place to another, and your standard trailer can fit in quite a few.

The ATV is far more easier to handle and has simple controls than a snowmobile. Though manual transmission ATVs exist, it is pretty easy to get an ATV that does not require clutching. Snowmobiles have sled runners and tracks, function differently than your normal ATV, bike, or car, and thus are harder to master.

The whole feel of driving a snowmobile is something completely new. Moreover, unlike the ATV, the snowmobiles are challenging to control and skid a lot. When you try to hit the brakes, the snowmobile also takes more time to come to a halt than your ATV at the same speed.

This causes a lot of accidents initially when the angler is not accustomed to the difference.

ATVs are fairly expensive, whereas a snowmobile is an inexpensive investment. If you plan on installing tracks on the ATV so that you can go ice fishing in any condition, the cost rises even further due to the setup and fuel consumption.

An ATV isn't designed to be used like that, and any modification is equivalent to using it outside its intended purpose, which does add to the costs. What most anglers do is buy a used snowmobile, which works great and thus is a huge cut down in the cost.

And the best part is that it does so while still serving its intended purpose, i.e., no modification needed. For ice fishing, it is a boon to have a snowmobile without paying anything extra. Heck, you don't even need to buy a new one. Can we buy a used ATV and then have tracks installed? Will that cut down the cost?

Technically yes, but it will still be more expensive than a second-hand snowmobile or even a new one. Plus, the cost will keep piling up due to the fuel. We asked several anglers about their experiences with used ATVs after getting it modified with tracks, and they all had one thing to say, "not worth the money!".

The snowmobile is a clear winner in this section.

Ooh, this is interesting as both the ATV and snowmobile scored four points each. Hence it is easy to deduce that both are suitable when it comes to ice fishing, and it all boils down to your usage, where you live, and your budget. Hope you really enjoyed this head-on comparison of the ATV and the snowmobile for ice fishing.

If you'd like to add anything extra, please write to us, and we'd be happy to take a look. We love hearing from our readers!