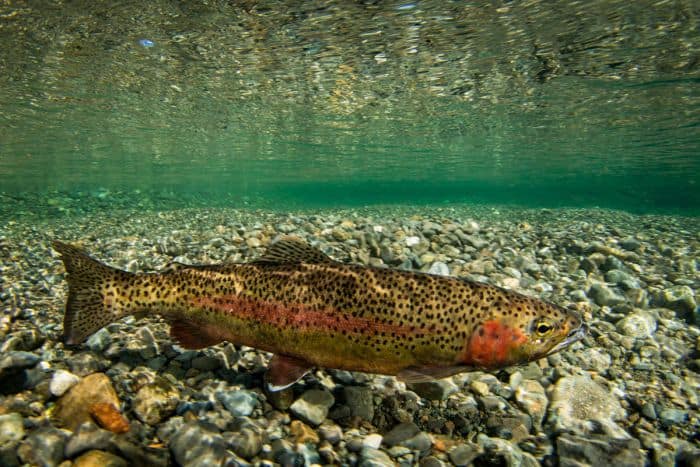 ​Rainbow trout are one of the most famous species among anglers and their habitat is simple. In a nutshell, ​rainbow trout are a cold-water species found in both freshwater & saltwater.

Resident stream rainbow trout habitat consists of shallow rivers and streams with gravel bottoms that are small to moderately large in size and well oxygenated. Reservoir or lake-dwelling trout are usually found in moderately deep, cool lakes with adequate shallows and vegetation.

However, this standalone piece of information isn’t of much use if you want to dominate while catching rainbow trout. You need to understand the message behind it.

​To completely understand the habitat of the rainbow trout and gain leverage from it as an angler,  you first need to be aware of their different ecological forms. Though the rainbow trout has 15 subspecies, we are going to talk about the three main types. ​These three forms include every known species.

Based on the habitat where they spend most of their adult lives, rainbow trout can be divided as:1. Resident Stream Rainbow Trout2. Reservoir Or Lake Dwelling Trout3. Steelhead Trout

​Rainbow Trout Habitat Based On Classification

The optimal habitat for this trout consists of clear and cold water. There should be a lot of riffles and runs in the stream, but the bottom should be silt-free and rocky. You will find more resident stream rainbow trout in streams where the pool to riffle ratio is 1:1.

Further, there should be enough areas of slow and deep water with lots of vegetation on the stream bank. There should also be lots of covers and structures within the stream along with adequate vegetation. And lastly, a stable water temperature regime is required.

This means that water temperature shouldn’t vary much across the length and breadth of the stream. ​In case you don’t understand some of the terminology used above, here is a quick explanation for some of them:

Silt: Fine sand, clay, or other material deposited as sediment by running water.

The best habitat for lacustrine (lake dwelling) rainbow trout isn’t much different except that the water should be deep and oligotrophic. However, lakes can vary in size and chemical quality. When we talk about the chemical quality of water, we refer to the dissolved oxygen, minerals, pH levels, hardness, etc.

Oligotrophic: A water body (especially a lake) that is relatively low in plant nutrients but contains abundant oxygen in the deeper parts.

The difference between a lacustrine rainbow trout and steelhead trout is that the juveniles & adults migrate to freshwater lakes instead of the sea, post-spawning. The juveniles are known to spend two years in streams and two years in lakes before attaining maturity.

Steelheads are the anadromous or sea-run form of the rainbow trout. Yes, it is a form of rainbow trout as there isn’t any difference in the DNA. Don’t let the name confuse you or let anybody tell you otherwise. However, have you ever wondered why it is called a steelhead?

It has been named so because of the silvery-metallic color the steelhead develops due to spending life at sea. The steelhead spends a large part of its life in the sea before it returns to freshwater for spawning.​

​The freshwater habitat requirements for both the adult and the juvenile steelhead are no different from those of the other two forms of the rainbow trout. However, two rules exist.

Smoltification: A process due to which a lot of physical changes take place in the body of a juvenile rainbow trout so that it can adapt to living in saltwater from freshwater. These changes include alteration in body shape, weight loss, silver coloration for increased reflectance, and an increase in sodium & potassium ATPase in the gills.

2. For Upstream Migration Of Adults

A water temperature of less than or equal to 20 °C (68 °F) with a periodic rush in the flow of water can be deemed optimal. 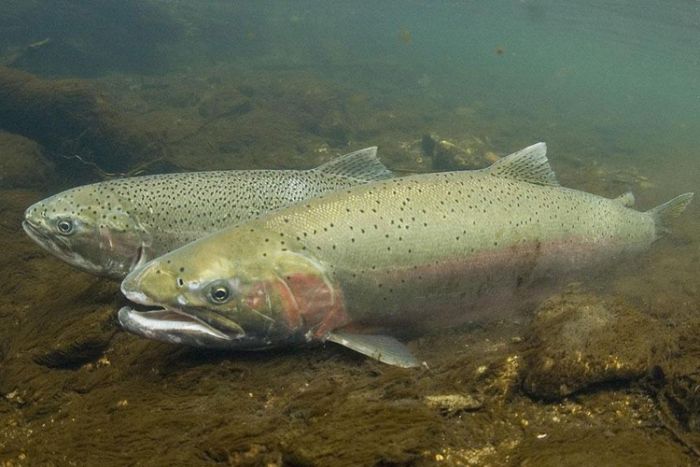 ​For reproduction, they prefer streams with tributaries that have lots of riffle areas with gravel. Thus, if a lake has no inlet or outlet streams, it is quite challenging to find reproducing rainbow trout there. Also, spawning begins at least one month earlier in an outlet stream as compared to an inlet stream due to the temperature difference.Depending upon the location, January-July are the usual spawning months in the Northern Hemisphere and August-December in the Southern Hemisphere. Also, the water temperature for the spawning eggs should be around 7 °C to 12 °C (44.6 °F to 53.6 °F).

Prolonged exposure to temperatures above 12 °C  results in a high mortality rate and abnormalities.

The females dig up redds at the head of a riffle. A redd is a spawning nest made by a female fish to lay eggs using her body and tail. The length of the redd pit is typically longer than the length of the female digging the pit, and the depth is greater than her body depth. The average depth is around 15 cm.

The position of these redds are in areas with a lot of gravel substrate. The rainbow trout migrate to upstream areas (jumping and crossing several barriers if they need to) in order to reach favorable spawning sites. A good site not only has optimal water temperature, but is also well oxygenated, has a gravel stream bottom and is silt, sediment free.

​When water flows from upstream to downstream, it carries more gravel to cover the exposed eggs. These gravels are bright, clean and different than the surrounding gravel. A female can take up to a week to build a redd. 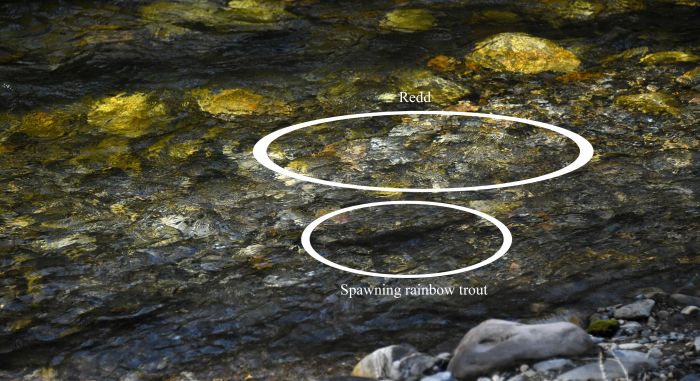 ​How To Use ​This Information While Angling?

​Memorizing the rainbow trout’s habitat isn’t useful unless you know what information to derive from that data. However, important ideas regarding the habitat of different ecological forms of the rainbow trout can help you gain critical insights. You can then use these insights to increase your catch rate.

Also, it can save you a lot of time by helping you look in the right places and avoid the wrong ones.

All forms of rainbow trout prefer streams with a lot of vegetation, cover, and structures. Their diet consists of aquatic insects, zooplankton, terrestrial insects, leeches, crayfish, mussels, and other small fish. Out of these, insects form a primary part of the rainbow trout diet.

Also, these covers and structures regulate the speed of the food floating away, making it easy for the fish to eat.

Structure: The shape of the course. It is dependent on channels, riffles, runs, drop-offs, pools, flats, and points. Structures are the reason why the water is fast or slow in certain areas. It is also influenced by the presence of covers and helps regulates water flow speed.

We hope you now understand why fly fishing is an extremely popular style while fishing for trout and especially rainbow trout. Insects are what these fishes naturally feed on and are most responsive to. 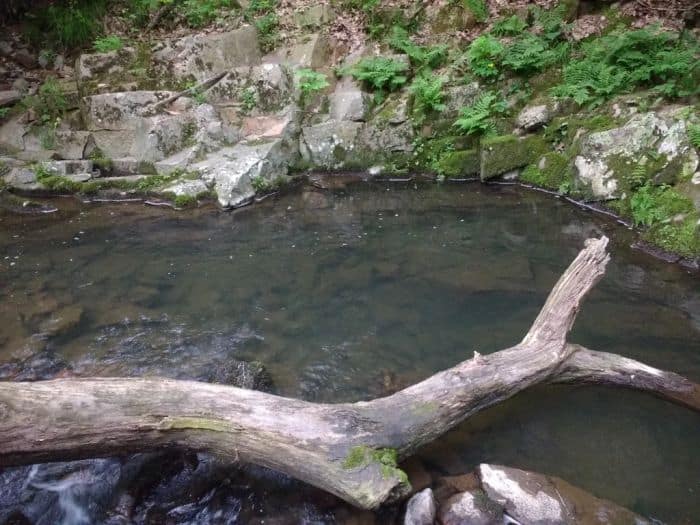 We are big advocates for letting the fish spawn to maintain the population levels and from a humanitarian perspective. Each female rainbow trout lays an average of 2,028 eggs, and killing her would mean around 1,500 to 2,000 lesser rainbow trout.

However, if fish eggs are what you are after, then looking for redds in silt-free gravel areas is what we suggest. Also, do not forget about the spawning months, i.e., January-July. Even though spawning can occur in the fall months depending on the location, the general trend of late winter and early spring to summer is commonly observed across the world.

Similarly, the pattern reverses when we are talking about the Southern Hemisphere. ​Fishing during these months significantly increases your chances to land a big catch as both the lacustrine and the anadromous forms of the rainbow trout are present in the streams.

Thus, you can infer that rainbow trout do not like warm water, and anything above 20 °C (68 °F) reduces your chances of finding them in those waters. Prolonged exposure to temperatures higher than 23 °C (73.4 °F) can be lethal for rainbow trout.

There is a possibility of finding some rainbow trout in water bodies having temperatures between 20-23 °C depending on the month and period in terms of spawning. Extensive research and observations indicate that adult lake rainbow trout prefer a temperature between  7-18 °C (44.6 °F to 64.4 °F).

They strictly avoid residing in waters above 18 °C. On the other hand, the adult stream rainbow trout thrives in water temperatures of 12-19 °C (53.6 °F to 66.2 °F). And if we had to quote one specific range, we would say that your sweet spot to find the maximum rainbow trout are in waters where the temperature ranges between 12-18 °CFor steelhead trout, we found this range to be higher than 4 °C but less than 18 °C. Steelhead trout activity, including migration, are severely affected and come to a complete halt if the water temperature falls below 4 °C (39.2 °F).​​​

​1. The average lifespan of a wild rainbow trout is between 4-6 years.

6. The presence of many beautiful colors on their skin gives them their name.

7. They are also known as redband trout.

8. Live baits like egg sac or a worm have time and again proved to be the best baits for catching rainbow trout.

9. The riverine form is a surface feeder.

11. The eggs of the rainbow trout hatch in about 21 days after they are laid.

12. The color of their meat ranges from white to dark red due to diet and environmental conditions.

14. You can find rainbow trout in every continent of the world (thanks to artificial introduction) except Antarctica.

15. Hover is the name given to a group of rainbow trout.

​The rainbow trout habitat is fairly easy to understand, and it can help you a lot while angling. Most anglers do not have any idea about this crucial information and do not bother to look it up either. Thus they look in all the wrong places and at the wrong time.

Having this knowledge becomes the difference between catching regular-sized rainbows, and that trophy catch everyone dreams of. It is the difference between waiting for hours to catch one rainbow trout or filling up your basket within 20 minutes.We hope you enjoyed this article. Is there any point that we have missed or something you really liked? Please let us know! We love to hear from you.

We all love to know about fishing! Each one of us at Fishing Is Bliss is an enthusiast in one area or another. From freshwater to saltwater, from rods to reels, and from bass to trout, we have you covered!

Fishing Is Bliss is a participant in the Amazon Services LLC Associates Program, an affiliate advertising program designed to provide a means for sites to earn advertising fees by advertising and linking to Amazon.com. Fishing Is Bliss also participates in affiliate programs with Clickbank, CJ, ShareASale, and other sites. We are compensated for referring traffic and business to these companies.